Concluding my review of the ships so far featured in Star Wars: Armada, this is a look at the vessels of the Imperial fleet. Characterised by sturdiness, brutal forward armaments and unrelenting aggression, the Imperial fleet certainly has a lot of character – as does each individual ship within it.

This article is intended to serve as a counterpart to my summary of the Rebel fleet, however the Imperials are the faction I have spent the most time playing as, and have by far the greater thematic appeal to me, so I’m likely to be a lot more emotive as I go through each ship. All I can say in my defense is that I’m a man of passion.

And, as always, this is all based on my participation in a series of tournaments around the UK – there’s an awful lot to this game, and to each ship, so I’m just hoping to pass on the insights I gleaned from my own limited experience.

I have already covered my feelings on the Raider to some depth, so I will try and keep this brief. In short, the Raider is a great utility vessel, but you have to know its limits. I rarely saw any Raiders included in other Imperial fleets, and when I did they were typically in line with my own take on them – as a versatile instrument, as a picket vessel, as an extra activation, or just as eye candy.

The simple matter is that I had tremendous fun flying the Raider. I didn’t get too sad when it was blown up and I loved blasting it around the engagement zone, zapping fighters and being a nuisance. I also enjoyed the rare occasions where I was facing a Raider – it was too potent to be ignored, too small to warrant a significant portion of my attention; it simply added to the challenge of facing an enemy fleet. For me, it also makes fleets feel much more rounded – like actual real-world navies, with different classes of vessel, rather than just one or two particularly powerful varieties.

There’s little I can say about the Gladiator that would surprise even rookie Armada players. The ship is ubiquitous in Imperial fleets – indeed, I can’t recall a single Imperial fleet out of the twelve that I saw that lacked a Gladiator – it’s a powerful, tough little ship that consistently pulls its weight.

The Gladiator is a schoolyard bully. In each game I witnessed or took part in it was fantastic at beating down other small-based ships with its punishing combination of broadsides and nasty frontal arc.  However, against anything big, the Gladiator had to gang up with other bullies – or else land one punch before running away like a coward. And I really like the fact that it has this amount of character.

Obviously, if you have one Gladiator in your fleet then it’s going to be the Demolisher – the ability to fire after moving is absurdly useful. However, even without the title, the basic Gladiator is still an incredible ship. It can easily set up double-arcs due to its wide broadsides and small base, and although it will quickly fall to sustained fire, it will sustain a solid beating at long range whilst it gets into position.

I used my non-Demolisher Gladiator as my flagship for Admiral Screed, and that’s not a decision I regret. By building redundancy into my list – an Imperial-class that doesn’t rely on critical effects, Ordnance Experts on my Demolisher – I was able to use my flagship aggressively without worrying too much about it taking fire. This meant that I could lose either my flagship, my Demolisher or my Imperial-class Relentless and still have two very powerful ships on the board. If I lost more than that, then the game was likely decided anyway. 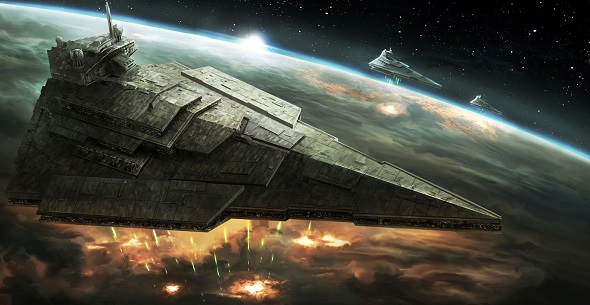 The Victory is an aged warship. Very aged. I personally felt the Victory-class was obsolete before Wave 1 of Armada was even released, and since Wave 2, with the Imperial-class, my disdain for the Victory-class is greater than ever. In truth, it can be an effective carrier, if that’s how you choose to live your life. But its limited manoeuvrability and speed leave me with little faith in its ability to perform in ship-to-ship combat.

My own opinions seemed shared at least a little by the other tournament players – the Victory was a rare sight across the Imperial fleets, and where it was present I rarely saw it having as big an impact on the game as other vessels in the same list. But that was just as likely due to my prejudice as to the ship’s performance.

The simple truth was that whenever I saw a Victory activating, I was always thinking, “That’s great – but imagine what it would be doing if it was an Imperial instead…” In my very first tournament game I faced two Victorys, and they managed to put up a fight – but I had foolishly chosen “Contested Outpost” as the objective, allowing them to sit near-stationary on the outpost in question, forcing me to attack them. Had they been forced to move positions themselves, things might have been different.

I want to like the Victory– it’s a great-looking ship, but it has too many limitations. It has a maximum Speed of 2, much like the Rebel MC80, but the MC80 has an extra “click” of turning at Speed 2, and has the ability to make itself even more manoeuvrable and speedy by using a Nav Team or Engine Techs. The Victory has no ability to account for its weakness in this regard, beyond simply being tough and having a decent, but not exceptional, frontal arc.

The Imperial-class is the jewel in the crown of the Imperial fleet. It’s huge – I mean, it really is enormous – it’s imposing, it’s completely iconic and fantastic fun to include in a fleet. It’s fast and manoeuvrable enough to enjoy the use of daring tactics and strategies, it kicks out buckets of damage and it can endure plenty more. It’s everything it should be, all in a single, very bulky package.

I think, though, the real danger of the Imperial is the fear factor. When one of those beasts starts cruising towards your fleet at Speed 3, it tends to draw your attention quite effectively away from all of the other dangerous ships that are also approaching you at high speed – even ships like Demolisher. Even when you have an Imperial-class in your own fleet, you can lose focus when you see another deploying opposite.

In my own games, I was surprised to see that it was rare for my own vessel, the Relentless, to inflict the killer blow. Whilst she certainly put a lot of hurt on enemy vessels, her main role was consistently to endure as much punishment as possible whilst my Gladiators carried out the bulk of the demolition work. Indeed, this was a theme I saw across multiple games – where the burden of damage-dealing fell to the smaller ships, whilst the Imperial made for a very large, very expensive bullet magnet.

However it’s used, the Imperial-class is the rightful centrepiece of any Imperial force. You certainly don’t need one to build a viable list, but you will never regret adding one to the fleet.

The Imperial ships appeal to me as a player as I really enjoy fast, aggressive ship-focused tactics based around getting right into your opponent’s comfort zone and going to town on their poor vessels. Whatever your play style, though, the natural strengths and character of Imperial vessels means you’re going to be getting into nasty scraps with opposing fleets on a regular basis.

I definitely prefer commanding Imperials to Rebels, but I’m trying new Rebel lists to develop my palate. And that’s one of the great things about Armada – there’s so much to the game that you can always find new avenues of exploration and experimentation.