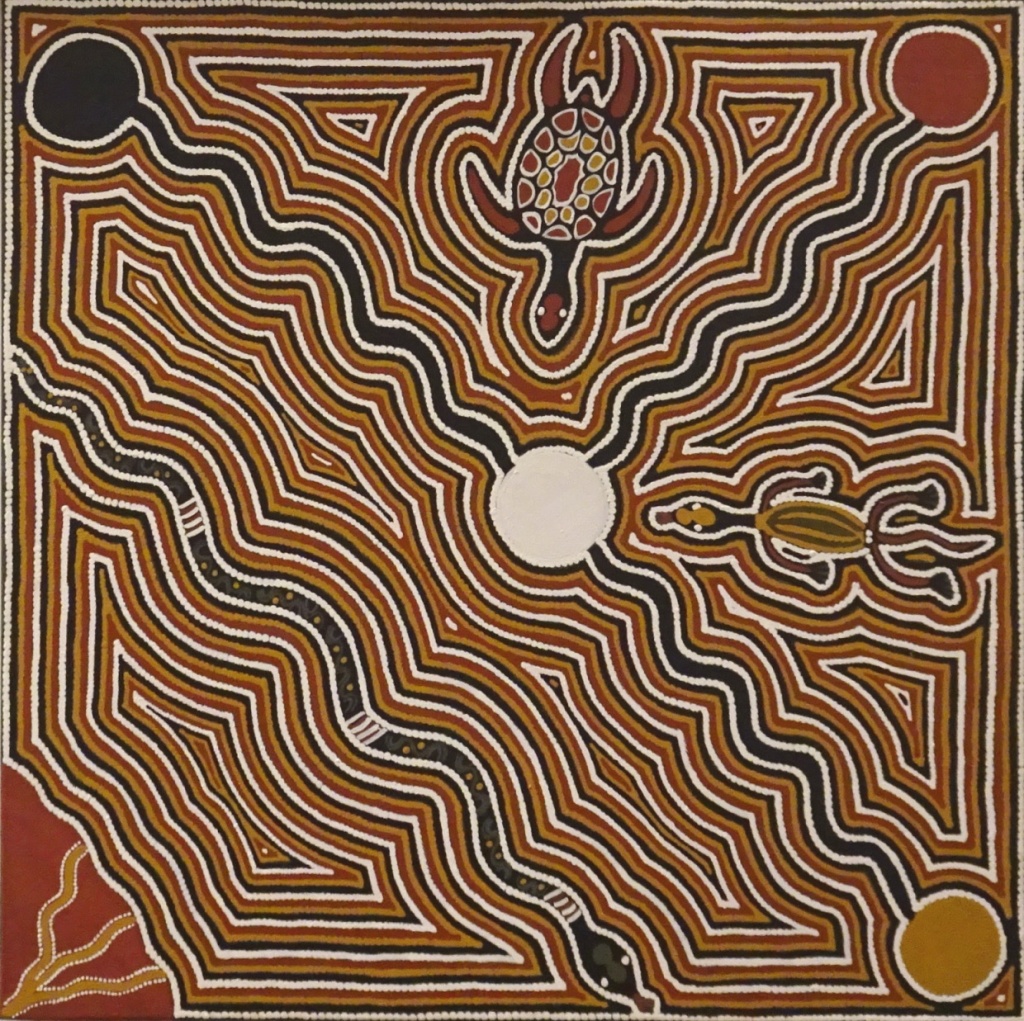 A few years back I was sitting around on my arse watching Ray Mears, who is one of my many spirit animals, and he was doing a show in Aboriginal Australia. He was talking about Aboriginal culture and art, and he did a segment with a modern-day Aboriginal artist whose name I definitely could not remember. But I did remember her incredible ability to create beautiful images in a very simple way, with a wooden stick, dipped in paint, and dotted onto a surface in painstaking detail. The final results were these complex, bright, colourful, striking pieces of art the like of which I hadn’t really seen anywhere else.

Turns out my Google-fu was stronger than I thought, because I managed to find out who the artist was – Ju Ju Wilson. With a little more Googling, I found a range of her paintings and picked out my favourite, which I’m pretty sure is called ‘Gubun’. I love this one because it’s been done entirely by “dot painting”, in ochre apparently, as described above. I suppose it’s not as sophisticated as pointillism, but it’s got this wonderful boldness, and a really primal feel to it.

The Aboriginal art scene is apparently huge, and I would love to have the time to learn more about it. But the forty minutes I had spare today went into finding just this one piece. Hopefully some day I’ll be able to properly expand my artistic horizons, and maybe even try and learn some of the techniques myself.

Music of the Day – ‘Mad World’ by Tears For Fears

I’ve been watching ‘Sense8’ on Netflix lately. About halfway through Season 1, it’s pretty brilliant, but takes a while to get into. And for fuck’s sake, don’t watch it with any conservative family members, you’ll spend more time explaining to them the gay sex, the group sex, the lesbian sex and the transgender characters than you will any of the weird mind-linking stuff. Spoiler alert, I guess.

Anyway, one of the episodes featured yet another dreary cover of ‘Mad World’, by Tears For Fears. There about a billion covers of ‘Mad World’, all miserable, slow and depressing. All lovely, too, I’m sure, but I wanted to share the original because it’s actually a much more interesting piece of music, I feel, than all the later versions which are invariably played on the world’s saddest piano. There’s some actual energy to it, and I find myself enjoying it a great deal more.