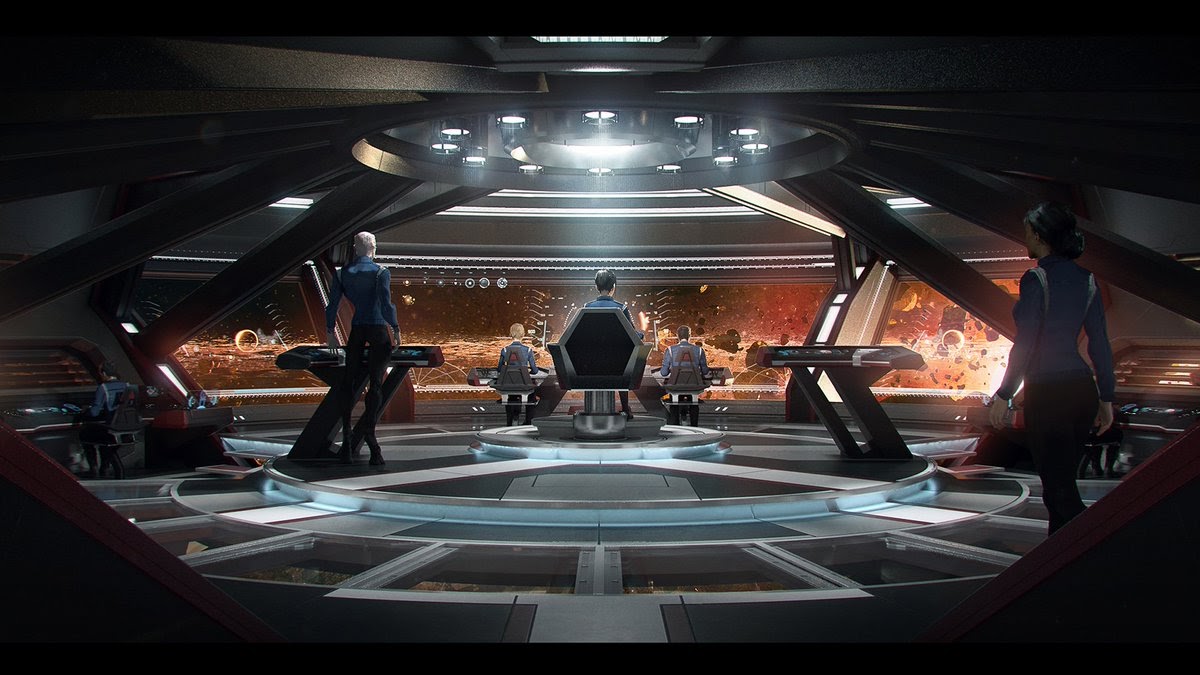 “First officer’s log, stardate 1207.3. On Earth, it’s May 11, 2256, a Sunday. The crew of the USS Shenzhou has been called to the edge of Federation space to investigate damage done to one of our interstellar relays. Blast burns around the hole are inconclusive. Were they caused by an asteroid, or was it deliberately destroyed to limit Starfleet communications? And if so, by whom? Despite the mystery, I feel at ease. It’s hard not to in the face of such beauty – in this case, a binary star system. Around these two suns, ice, dust, and gasses collide to form planets future generations will call home. A humbling reminder that all life is born from chaos and destruction.”

“None forthcoming, Commander.” Saru taps away at his console. “There is no chemical residue, no ionic scoring indicative of a particle weapon, and the damage is too limited for any kind of explosive weapon.”

Michael Burnham stands at the front of the bridge, gazing into the image on the viewscreen as a worker bee clamps hold of the relay buoy and turns back for the Shenshou‘s shuttle bay.

Behind her, Captain Phillipa Georgiou enters, a beacon of calm confidence. “Status, Number One.”

Burnham turns to her captain. “Nothing yet to report, Captain. We found the buoy, and it has a large hole in it. Saru is struggling to produce an answer.”

“I am not struggling, Captain,” Saru protests. “I merely lack the data required for a satisfactory conclusion. As a trained scientist, I might have expected our First Officer to appreciate the value of an empirical approach.”

Burnham raises an eyebrow. The other bridge officers exchange glances. Georgiou raises a quieting hand. “Alright, you two, we all know you’re both smart. How about you put those brains to work and take a guess?”

Burnham gestures to Saru, inviting him to go first. He shakes his head. “Please, as our executive officer, Commander Burnham, your analysis must take precedence.”

Burnham nods curtly. “The buoy is of limited strategic value. It forms part of a relay network with layered redundancies, and the nullification of this unit has resulted in no detriment to our frontier monitoring capabilities. In short, Captain, if this is an act of sabotage, it was carried out by someone who had no strategic goal in mind. My deduction: this was a freak accident, a stray rock flung out from the stellar disc at an unfortunate trajectory.”

The Kelpien nods in acknowledgement. “Commander Burnham offers a succinct analysis, but one based on supposition and circumstance. The damage to the relay is comprehensive and precise, leaving no functionality whatsoever. To put it bluntly, you could not switched the relay off more permanently if you were trying, and space rocks are rarely so determined. This must have been a deliberate act.”

Georgiou now considers Saru’s analysis. “Two capable Starfleet officers, reaching opposite conclusions, based off the same data.” She strokes her chin, imitating a wizened, bearded old sage. “Lieutenant Detmer, what would you do in my situation? Who would you bet on?”

Detmer, sat at the helm station, smiles. “My dad always taught me never to bet against Vulcan logic, Captain. But he also told me that when there’s trouble, follow the Kelpien, ’cause they know their way to safety. So, I don’t know. I’m sorry, Captain.”

“Don’t apologise, Lieutenant,” Georgiou insists, “your dad sounds like a smart man. Alright, let’s get to the bottom of this. Saru, run a tachyon sweep at low-band frequency, see if we can pick up any warp trails that have been masked by those stars.”

“Aye, Captain,” Saru answers. “Running sweep. Any warp trails will have to be recent, even just a few hours is enough time to…” He trails off. “Captain, I, there’s something out there. In the debris field.”

Burnham hurries over to Saru’s science station as Georgiou inquires further. “What’s out there, Saru? A ship?”

“Difficult to say, Captain, it’s-” Burnham cuts him off, shunting him out of the way and taking over the console. “It’s some kind of artificial construct, Captain,” she explains. “Roughly a hundred-and-twenty-thousand kilometres from our position. Symmetrical in shape, it seems to be around three hundred metres in size.”

Saru rolls his eyes. “I, too, can read data from a console,” he says, shunting Burnham away from the console, “and I can also deduce that the reason for First Officer Burnham’s ambiguity is the result of some kind of scattering field around the object. Whatever it is, Captain, it’s hiding from us.”

Georgiou’s eyes narrow. “Alright, both of you, my ready room, now.” She stands up and straightens her uniform. “Detmer, you have the conn.”

The beautiful brass telescope in the Captain’s ready room provides a better view of the object, but it remains obscured by asteroids. Whatever it is, it’s rendered in bronze, and is elegant, almost organic, in shape. Burnham squints through the eyepiece in frustration.

“I still can’t figure it out, Captain,” she says, adjusting the focus. She abandons the old astronomical device and stands straight. “Captain, Phillipa, what are we doing out here?”

Saru bristles at the familiarity, but Georgiou smiles. “Something bugging you, Michael?”

“Why are we here, investigating a broken antenna? And then we find this? It has to be more than coincidence.”

Georgiou’s smile widens. “So you think a little maintenance work is beneath us?”

Burnham remains severe. “Captain, this is a Walker-class exploratory vessel. Our long-standing mission is searching for imminent supernovas. Fixing busted satellites is…” She searches for the right words. “Is a waste of material.”

Georgiou moves to behind her desk and takes a seat. On shelves behind her is a collection of old navigation equipment – sextants, calipers, compasses, even one of the first subspace orientation devices from before the days of Starfleet. Georgiou leans back in her chair. “We are barely ten light-years from Klingon territory. This system is the last piece of Federation real estate before you hit neutral space.”

Saru nods. “This is one of the farthest reaches of the outer frontiers. Captain, are you saying that you suspect Klingon activity in this system?” His ganglia twitch, extruding slightly in alarm before retreating again.

“No,” Georgiou says, “not yet. Starfleet hasn’t recorded an encounter with a Klingon ship in twenty years. By all counts, the Empire is in disarray, focused on internal squabbles. But,” she says, cautiously, “there have been reports. Missing ships near the border. Sensor whispers all along the frontier. I recently spoke to Captain Nicholls – she was investigating a burst of neutron radiation near Betazed three weeks ago, and she swears she saw the stars dancing – dancing – in front of her eyes. She says the stars were dancing in the shape of an eagle, or a falcon, or some other bird of prey.”

Burnham’s mouth hangs open, and Saru’s ganglia stretch out behind his head. Georgiou stares out the window at the two suns, tearing at each other in a tug of war.

Burnham breaks the silence. “Captain, as your First Officer I should have been made aware that we would be heading into battle.”

Georgiou looks towards her. “Battle? We’re not going into battle. And I didn’t tell you about Starfleet’s suspicions precisely because of your history with the Klingons.” Georgiou leans forwards. “Michael, this isn’t a warzone, this is Federation space. You’re right, we’re not here to fix a satellite, but we’re not here to start a fight, either. Starfleet just wants to cover all its bases.” She stands, and moves over to the window. “Whatever’s out there, whatever broke our satellite, it wasn’t random. It’s sat out there, watching us, hiding in plain sight, fogging our sensors but holding our attention.”

“Captain Georgiou, this is clearly a dangerous situation and we must immediately call for backup,” Saru says frantically. “We are alone out here, and completely exposed. If there are Klingons in this system, we are entirely at their mercy.”

“I must concur with Science Officer Saru,” Burnham says. “At least send word to Starfleet. This is clearly a trap.”

Georgiou smiles again. “Have we fallen through a wormhole into a parallel universe? My first mate and my science officer, agreeing with one another?” She laughed. “When a troubled Kelpien and Vulcan logic align, who am I to argue?” She moves back to her desk and activated the comm-link. “Lieutenant McFadden, send word to Starfleet Sector Command, advise them of the situation and the unknown object, and request any available ships to rendezvous with Shenzhou at system JWST-86690.”

Burnham remains composed, but her eyes betray her anxiety. “What do we do until they arrive? The nearest ships will be hours away.”

“Well, Number One, when was the last time you piloted a shuttle?

On to part two.

As part of my analysis and break-down of ‘Discovery’, I feel it’s not enough to merely point out the problems – I ought to be offering solutions. As a result, this is the first installment of a personal project to re-write the series from the bottom up.

I’ve set myself a few rules – first, that most of the premises set up by the show are maintained. Specifically:

I will also be keeping almost all of the same characters and settings, where possible, and will do my best to hit the same plot milestones as the show.

This is entirely self-indulgent, and I make no apologies. I certainly have no shame.

This first installment is to set the scene – to establish the same setting and the same characters as we meet in the show. I wanted to capture Georgiou’s same easy confidence and cool charisma, and the playful rivalry between Burnham and Saru. We’ll see how it all plays out.