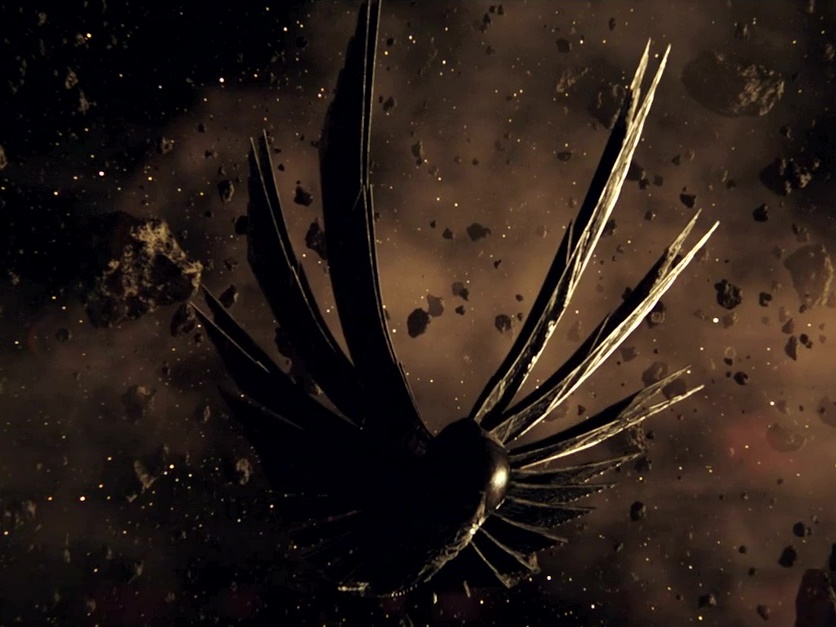 The previous instalment can be found here.

The shuttle alights on the bronze, ornate landing deck of the alien station, dimly lit by yellow lights. As the shuttle comes to a halt its ramp descends, and Georgiou, Burnham and the two security officers disembark, phasers drawn, tricorders out, eyes narrowed and darting around for danger.

Georgiou turns to one of the bodyguards. “Furlan, stay here, guard the shuttle. Burnham, Tallman, with me.”

They move furtively towards a corridor and head down it. Burnham surveys the walls and their decoration. “Ornate detailing across every surface. Intricate patterns, carved into the metal by hand, judging by the uneven finish.” She runs her hand over one wall section, letting her fingers brush across each groove and ridge. “It’s cold, and solid. This entire structure might be a single piece of metal, sculpted into shape.”

Georgiou keeps her eyes forwards, checking every alcove and corner for potential threats. “Sounds like a slow way of building a station. You’ve told me what the scientist inside you can see: what does your anthropologist make of this?”

Burnham keeps her gaze on the structure around them. “Captain, this is ritualistic, ceremonial in design. I don’t think it’s a station, I think it’s a temple.”

They enter a circular room, with corridors leading off in multiple directions. At the centre of the room stands an obelisk, covered in arcane symbols. As Burnham examines the obelisk, one particular emblem catches her eye. She’s seen it before – an image of an armoured warrior flashes through her mind, the symbol engraved on his helmet, striding through flames towards her. Screams and explosions echo all around. The warrior holds a vicious blade in his hands, which he lifts over his head and then swings down towards her.

Michael keeps her gaze locked on that symbol. “Klingons,” she says. “This is a Klingon hieroglyph. A sign of one of their Great Houses. Captain, we have to leave.”

“Not without making contact. If this is a Klingon station then there’s a reason they put it here, and we need to know what that reason is.”

“Aye, captain,” Burnham concedes. She scans the room and the corridors leading away from it with her tricorder. “The solid mass of the structure is making it hard to get a topograhical reading. I have no idea of which way we should go.”

Georgiou walks up to one corridor entrance. “Down this one.”

“Why that one, captain? Do you know what’s down there?”

“We don’t know what’s down any of them. Sometimes, you just need to make a decision.” Georgiou starts down the corridor, Tallman following her. Burnham joins them, and they move steadily onwards.

They reach the next room, circular again, this time with vaulted alcoves all along the walls. Deep channels run from each alcove to a grate in the room’s centre.

Georgiou squats down to examine one of the channels, following it to the grate. “Analysis, Number One?”

Burnham surveys the chamber. “The grooves in the floor, clearly intended to carry fluid. Alcoves at the side, big enough to hold a single humanoid.”

“You think this was a shower room?” Georgiou asks with a smirk.

“Captain, I think this was a sacrifice chamber.”

Georgiou catches Burnham’s eye. They share a look, and then turn for the exit.

An armoured warrior drops into each alcove from above. They each dash forwards as they land, roaring. Georgiou and Tallman open fire, dropping a couple of them, as Burnham grabs her communicator and flips it open. Before she can speak into it, one of the warriors smashes it out of her hand and swings for her head. She ducks, and strikes him back with both hands clasped together.

The Starfleet officers are surrounded. Georgiou takes down one warrior with a flurry of high kicks and rapid punches. Tallman keeps firing his phaser, but is grabbed from behind thrown into a wall. Burnham fends off one of the armoured foes with steady, precise attacks, each blow delivered with Vulcan-like accuracy.

But they are outnumbered. Georgiou has to dodge the powerful sweeps of a Bat’leth, getting backed up against the wall as she does. Two warriors lay into Tallman, beating him to the ground, before they each produce vicious daggers which they plunge into his back. Burnham’s elegant poise meets its end as her adversary hunkers down and then charges forwards like a bull, grabbing her around the abdomen and then diving, plunging her backwards into the floor.

Burnham, dazed, looks across to see Georgiou stabbed through the shoulder. Burnham screams out. “Captain! Philippa!” she bellows, but it does no good, as Georgiou sinks to the floor. The last thing Burnham sees is an armoured gauntlet, striking her full in the face.

Finally, some action! Narratively, this isn’t far off filler. It’s a means of getting the characters into the hands of their Klingon captors. We see a little Klingon culture along the way, but not a great deal.

And poor old Tallman – he gets no lines, just a couple of stab wounds to prove that these Klingons aren’t messing around.

I lack a great deal of imagination, so all of the side characters get names taken from actors. Furlan is named for Mira Furlan, of Babylon 5 fame, as is Tallman. Patricia Tallman is actually a Trek alumnus – most notably from ‘Starship Mine’, but has appeared in plenty of TNG, DS9 and Voyager episodes.