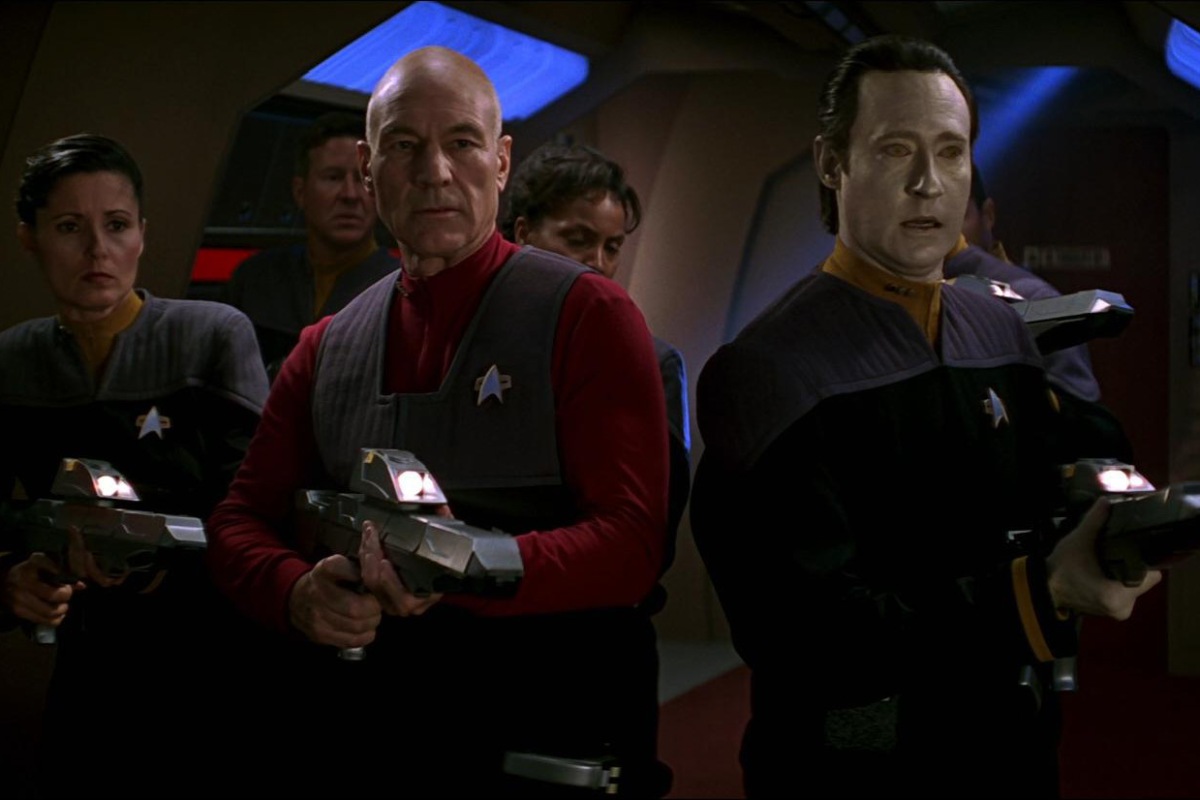 Last night, the below script was accidentally uploaded by a CBS staffer to the Internet Movie Script Database. It was removed just a few minutes later once the mistake was realised, but fortunately, we here at CrudeReviews.net were able to download it in the short time it was live, and we decided to share it with you here.

Are you all super excited for the Alex Kurtzman-led return of Captain Jean Luc Picard, starring the legendary Patrick Stewart? We certainly all are! #PicardisBack #StarTrekRocks #WeLoveStarTrek #ProgressiveSciFi

SEASON 1, EPISODE 1
PROVISIONAL TITLE: “As the night the day, thou canst not then be false to any man.”
ALTERNATIVE TITLE: “Let Them Bleed”

The camera zooms out to show the whole ready room at a dutch angle. All the lights are blue, and everything’s dark. Behind his desk, PICARD sits in silence, grizzled, a rough scar down one side of his face, lifting a dumbbell in one arm. He stares at a screen in front of him, with the words “WAR REPORT” in large font at the top. There are red icons and lines on one half of the screen, and blue icons and lines on the other half of the screen.

In walks NUMBER ONE. She’s tall, of West Asian descent, and identified in all the show’s press releases as “Star Trek’s first Indian Muslim Lesbian!” She’s also half-Andorian, or something, with all of the personal drama that presumably entails.

NUMBER ONE
We’re almost ready to begin negotiations, Captain-Ambassador. As Starfleet’s top diplomat, it will be your job to bring peace to this sector. Before the entire Federation falls.

PICARD
Well, Number One, this war with [distant sound of dice rolling] THE ROMULANS and [sound of a dart thumping into a dartboard] THE JEM’HADAR, led by [sound of coin flip] THE BORG is taking its toll. The entire Alpha Quadrant could be wiped out soon if we don’t find a way to stop this dreadful war.

NUMBER ONE
Yes, wars are terrible. And thank you for so succinctly expositing the peril we currently face. It sounds like this awful, awful war could take nine, maybe even ten episodes to resolve.

They walk out of the ready room together.

INT. THE SHUTTLE BAY
Picard, Number One and a Tactical Diplomacy Team enter the shuttle bay. They are all dressed in armoured space suits, carrying flashy new phaser rifles. They march past the shuttles straight to the rear door.

NUMBER ONE
Captain, aren’t we taking the shuttles?

PICARD
Not today, Number One. Today we need to be a little more direct. Ready?

The rear door opens, revealing a planet below them. The camera flies out of the door and pans back to an exterior shot of the ship, the U.S.S. Enterprise, NCC-1701-XXX. A heavy metal remix of the ‘Next Generation’ theme plays. The Enterprise is a sleek, futuristic ship with nacelles and everything. She’s Starfleet’s newest consular ship, armed with fifty billion photon torpedoes and the newly-designed “Peacebringer” anti-planet array.

Inside the shuttle bay, an automated voice addresses the team.

Picard, Number One and team run and leap out of the shuttle bay whilst Black Sabbath’s ‘Iron Man’ plays non-diegetically.

EXT. THE PLANET’S SURFACE, DAY
WEYOUN (Do you remember him???) and SOME ROMULAN stare in horror at a holographic tactical display.

SOME ROMULAN
Weyoun, it’s the Enterprise, she’s in orbit!

WEYOUN
The Enterprise? She’s an Ethics-class consular gunship! And she can only be captained by one person…

SOME ROMULAN
(gasping)
Picard! Quickly, we must hide the children!

WEYOUN
(to a Jem’Hadar soldier)
Get the troops ready and prepare our defenses for an orbital diplomatic assault!

EXT. THE SKY, DAY
Picard, Number One and the Tactical Diplomacy Team plummet through the air, the front of their spacesuits glowing red hot because that’s what happens when you enter a planet’s atmosphere, so this is still technically science-fiction.

Suddenly, powerful LASER BLASTS fire up at them from the surface! Arcs of deadly green energy bolts fill the air. Two of Picard’s diplomatic staff are vaporised as soon as they are hit.

NUMBER ONE
Captain, we can’t withstand this amount of firepower! We have to ab-

She screams, an energy bolt striking her and covering her in green, coruscating energy ribbons. Why she doesn’t get vaporised like the other two is unknown. She howls in agony as her body gets twisted and contorted by the energy, breaking her bones and searing her skin. This goes on for at least six minutes. Eventually, her eyes explode and then her entire body explodes inside her spacesuit, filling it with a goopy, bloody mess.

PICARD
Number One! Well, she died doing what she loved – convincing people on the internet that this was still a progressive show with new ideas. It’s just up to us men now, boys!

The assault team cheers, unfazed by their losses or the unyielding anti-air fire that still fills the sky. They continue their descent to the enemy position. One of them speaks up.

TEAM MEMBER
Say, captain, did we ever find out why the enemy wanted to go to war with us? It seems like the Romulans would be hesitant to ally with such a destructive force as the Jem’Hadar, and in any case, wouldn’t the cost of a war with the Federation and occupation of planets outweigh any strategic benefit in the long term?

He immediately gets hit with a laser blast and incinerated.

PICARD
Any other questions?

ROMULAN OFFICER
Remember, as you fight, be brutal, and only communicate in grunts and growls. We’re the baddies in this war, so we can’t do anything that will in any way humanise us or allow the audience to develop any sympathy for us.

ROMULAN SOLDIER
But I’m fighting for the security of my empire and for the freedom of my loved ones!

ROMULAN OFFICER
No you are not, maggot! You are a nameless grunt! You will throw yourself in the way of phaser blasts and if you are lucky, you may hit a Federation soldier, thereby increasing the level of peril!

Just then, Picard smashes into the soldier from above, his armoured space suit crushing the green-blooded Romulan into a cloud of red mist and gore. AC/DC’s ‘Back In Black’ blares over the soundtrack.

Picard taps a button on the side of his helmet, and the whole helmet folds back and into nothing, revealing Picard’s face and bald head.

PICARD
Alas, the cost of war. It is so terrible a thing that we ruin and slaughter when peace might otherwise prevail. Oh! How I long for the days of peaceful exploration, where we can uphold Starfleet’s true ideals of mercy and discov-

His voice is drowned out by the screams of the Romulans around him.

INT. A COMMAND CENTRE
Weyoun and Some Romulan are now in a dingy, poorly-lit command centre, filled with Jem’Hadar and Romulan soldiers.

WEYOUN
He’s made planet fall! We should send three brigades of our best troops to slow him down!

SOME ROMULAN
Don’t be insane! He’s the Federation’s top diplomat! We don’t stand a chance in a fight against him. Do you think he would let us live if we surrender?

WEYOUN
It doesn’t look like we have much choice.

Picard kicks down the door and strides in, rifle in hand. He shoots all of the other Romulans and Jem’Hadar before they have chance to react. Weyoun yelps, and drops to his knees, his hands clasped together.

WEYOUN
Captain-Ambassador Picard, please! We surrender! Unconditionally! Spare our lives, and we will work with you to bring this war to an end! We see now that we were at fault, and we want to learn from Starfleet’s ways of peace and equality, so that we can be better ourselves!

PICARD
Up yours, dickhead.

Picard punches Weyoun in the head, so hard that his head spins around completely, and we hear the sound of his neck snapping. Picard points his rifle at Some Romulan.

PICARD
There are now sixty Starfleet Abdul Hamid-class gunships in orbit of this planet. Surrender this sector, or we will be forced to wipe out every living organism and turn this world into a barren tomb.

Some Romulan nods nervously, then carefully shuffles to a console at one side of the room. He presses a button, and on the display a large, red icon appears: “SURRENDER SECTOR”. He pushes it. On the other side of the room, a display labelled “WAR MAP” turns from red to blue. Little Starfleet badge symbols replace all of the Romulan symbols.

Picard nods. He taps his commbadge.

PICARD
This is Picard. Diplomacy accomplished. One to beam up.

He is consumed by the sparkly transporter effect and disappears.

INT. THE BRIDGE OF THE ENTERPRISE
Picard strides onto the bridge in full dress uniform. He addresses the crew.

PICARD
Today, a great victory was won for peace. Through careful negotiation, we were able to end the war in this sector. Although we still have the rest of the Alpha Quadrant to pacify, today proves that we can restore order to the Galaxy by embodying Starfleet’s ideals of ethics, co-operation, discovery and science. This is what it means to be Starfleet, and we have shown that diplomacy, not violence, is always the way to resolve our differences.

The crew applaud, some with tears in their eyes. An Admiral gets up from their weapons station and hangs six medals around Picard’s neck. Inspiring music plays. The audience screams in joy about how Star Trek has returned to its moralistic roots.

Then, an alarm sounds. The OPS OFFICER gasps.

OPS OFFICER
Captain! There’s another ship on an intercept course! I’m not sure who it is, but I’m getting some data coming through now.

On his screen, in large font, are the words “COMMANDING OFFICER:” and below that, four empty spaces. Slowly, one by one, the empty spaces are filled with a letter each. “D”. Then “A”. Then “T”.

That’s right, Commander Data! Do you remember him? The robot guy? He’s in this too! COMMANDER DATA! HE’S IN THIS SHOW AND YOU RECOGNISE HIM! TUNE IN NEXT WEEK AND YOU MIGHT SEE HIM! COMMANDER DATA! WATCH THE NEXT EPISODE, ASSHOLES!

Well, that looks exciting! We really like the bit where Picard shot all those people, that looks really good. And what about Number One? Could she be the new progressive face of Star Trek? Is this show leading the way for representation of minorities in sci-fi? Probably! The only thing that was really missing from this script was some kind of mystery plot or hidden identity, but who knows what crazy twists and turns they have in store for us in the other episodes? We can’t wait!

20 thoughts on “EXCLUSIVE: Leaked Script from the Pilot Episode of ‘Star Trek: Picard’”